Slack vs Microsoft Teams: Which One Is Best for Your Project Management Needs?

Slack vs Microsoft Teams – Which app is best for your project management needs?

Microsoft Teams is considered to be one of the best tools that are available in today’s market. It wasn’t until 2016 since it came into inception. We already know that Microsoft has been a leading IT company in the industry for far too long. Before getting started with MS Teams, it was rumored that Bill Gates was interested in buying Slack for reportedly 8 Billion U.S. Dollars.

However, things didn’t go as expected…

You can have an idea regarding the popularity and functionality of Microsoft Teams by getting the actual statistics anywhere from the internet. As long as the usage side of the tools is concerned, we think that MS Teams is much better. And yes, we tried both tools for a very long time. Initially, we started with Slack and then transitioned into MS Teams as time went by.

Don’t get us wrong; Slack is awesome, but it’s just that MS Teams offers more functionality, interactivity, and sub-options at various levels. While evaluating Slack vs Microsoft Teams, the latter did seem a little difficult to use. However, we eventually realized that MS Teams had to offer a lot more than Slack from a long-term use perspective.

The basic difference up until 2018 was that the Microsoft Teams didn’t have a free plan for its users while Slack has always been free. MS Teams later converted to a free version for all users across the world. This was a game-changing strategy. Not only did MS Teams’ user base increase exponentially, but the program itself received a warm welcome from the project management community.

By far the biggest difference between the two is that Slack is very easy to administrate and set up. On the other hand, Microsoft Teams is designed for large enterprise setups or multinational companies (MNCs).

To overcome the “difficulty” curve, Microsoft Teams, returned the favor by providing various outstanding integration options and default collab with MS Office 365 suite. If integration is your main focus for chatting with your team then you will be glad to know that Slack takes the game one step ahead. In terms of integration, Slack is slightly better – and apparently easier to integrate with 3rd party apps.

We have mentioned it before that both of these applications have their freemium plan available. However, if you want to get the best out of them then you need to try the paid version. When it comes to Microsoft Teams, you have to have a business or premium plan and you need to make an account for that. 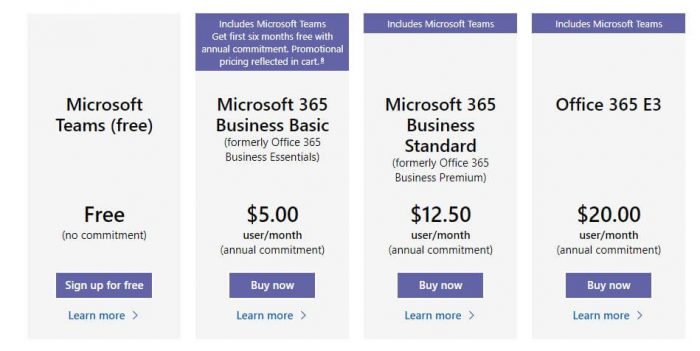 If you are already using the paid version of Microsoft Office 365, MS Teams will come by as an add-on experience. Long story short, the most cost-effective office 365 plan that has Microsoft Teams inclusion in it is known as business essentials. It costs $5 per month for each user.

You will be glad to know that it is cheaper than Slack’s base plan (standard) which costs $6.69 per month for each user. Microsoft Teams is very feasible and attractive as it also gives you access to Office 365 suite for just about a lump sum price of $5.

Slack vs Microsoft Teams: Getting Started As a New User

If you want to get started with MS Teams then you have to have a lot of patience during the onboarding experience. Microsoft Teams asks a lot of questions (*depending on integrations with Microsoft TFS and other applications) These steps are only one-time and need to be repeated in one form or another by your team members. 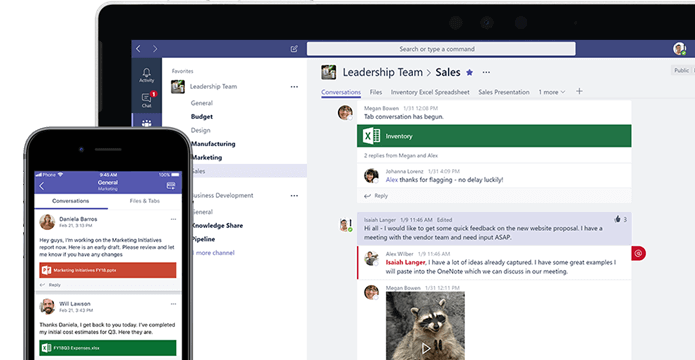 Source (Getting started with MS Teams)

Once onboarding is complete, MS Teams will be asked about free plans, trials, or annual plans, etc. After a series of steps, it gives you access to your Microsoft Teams control panel, where you can start creating different channels/ rooms for team members to use.

You will be happy to know that on the other hand, Slack’s getting started is too easy, you don’t have to be blather/bother about too many formalities, personal questions and you don’t have to spend a lot of time in the making. You don’t even have to provide your credit card details until you’re intended to buy a paid plan, you just have to finish the seven simple and easy steps to getting started with Slack.

Getting Started With Slack

On the other hand, inviting users via Microsoft Teams is a bit complicated. First, you have to log in from your office 365 admin panel. From then on, you need to add a user to the administrative/admin panel. Then the invited users will get a link that sends them over to MS Teams for onboarding. 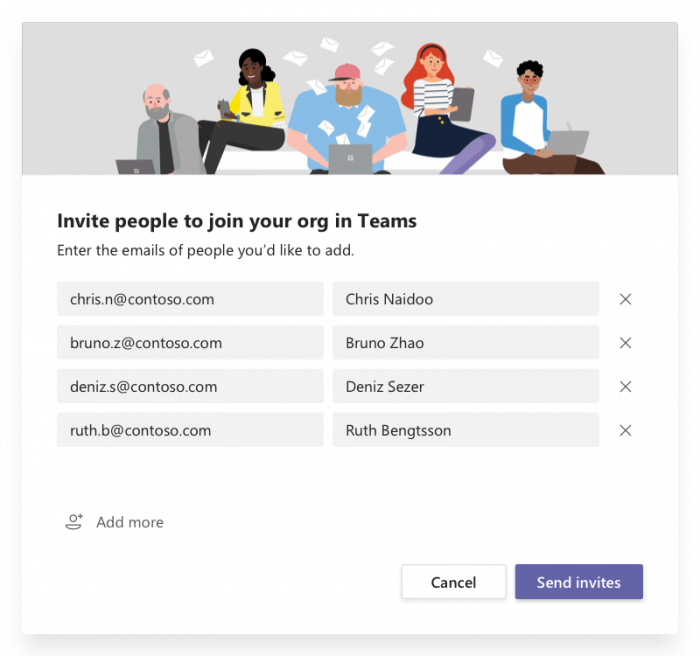 Slack vs MS Teams: Layout and Design Based Differences

From a very minute design and layout related perspective, both Microsoft Teams and Slack have a smaller vertical portion for the admin panel. However, the horizontal portion that is used for conversations is large. On the very left side, Microsoft Teams has an extra panel that has features, such as; Activity, Chat, Teams, Meeting, and Files. The Search box in MS Teams has several options and functionalities as well.

The 7 Best Slack Integrations and Add-ons of 2021

The Option of the standard private chat is included in both tools. Whoever is the recipient of the chat has many other features that are considered to be very useful and enticing, such; as editing, deleting, pinning, and addition of your messages. Moreover, it also has many other options like mentioning a person, starting another thread, sharing a file, etc. 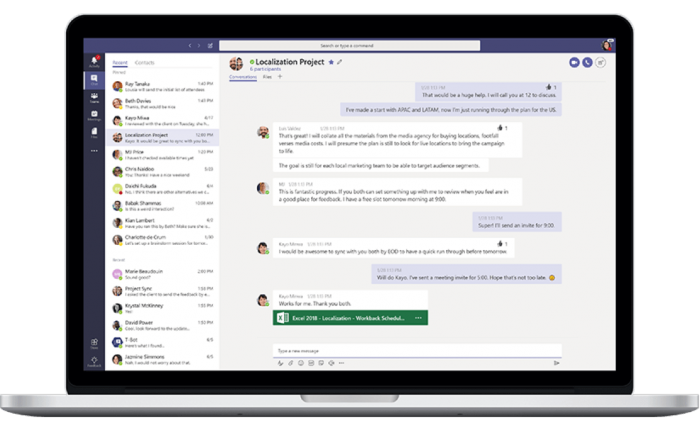 Microsoft Team has an advanced formatting system that helps to eloquently send your messages to the recipient. This is perhaps the biggest difference between Microsoft Teams and Slack when it comes to messaging.

With the help of this value-added item of Microsoft Teams, you’re able to send bulleted lists. You can also change the color of fonts; you can make the words bold and italic – so on and so forth. Another enticing and attractive feature of Microsoft Teams is that you are able to send Gif images and emojis as well. Finding an awesome emoji is just a click away; you just have to enter the keywords, and the rest of the process will carry on through the in-app suggestions menu.

On the other hand, Slack not only makes the opportunity to like someone’s comment but it also has many other options for sending emojis. You can react to notify the concerned person who originally sent the message – either through private chat or in a public workspace group channel. This system is also there in MS Teams, but Slack covers it slightly better. 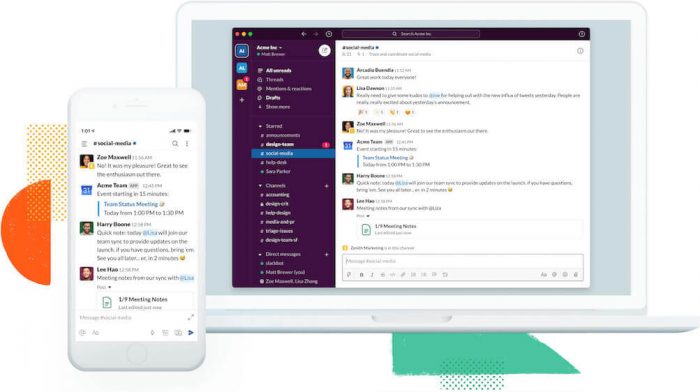 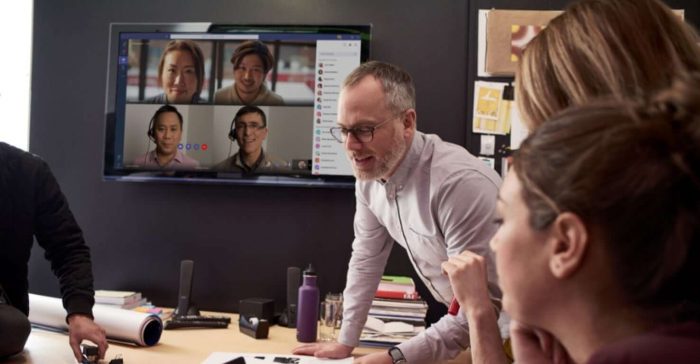 The video call experience for Microsoft Teams is right on the dot. We tried it, and it worked flawlessly over different network types varying over different connection speeds.

The only difference between Microsoft Teams and Slack when it comes to video calls is that in Microsoft Teams, you can add up to 250 persons at a time. This is partly because of the reason that MS Teams was created for enterprise and MNC level users. Slack has a more homely feeling and tends to maintain a casual breeze overall.

Check out this awesome Slack integration:

Integrations play a vital role in defining the user experience curve. It’s not just about the Slack vs. Microsoft analogy. Look at the bigger picture. Would you rather use an application with tons of integrations to make workflow easier, or do you prefer something limited?

Our guess is the former.

The latter choice makes it harder to complete work on time, with convenience – and that too as per Agile framework methodologies.

Slack and Microsoft are no exception to that rule. If we strictly talk about integrations, Slack takes the lead because it comes with 1500 3rd party apps. Yes, and those 1500 app integrations are out of the park.

Meanwhile, Microsoft has a different approach to integrations. Just like Apple guys, Microsoft has added a sense of exclusivity to its product. For app integrations to MS Teams, you need to go through the Microsoft 365 route. Then there comes the concept of SharePoint, which is an entirely different chapter at the moment.

Sharepoint comes into play when you are also looking to create separate Channels on Microsoft Teams. Unlike Slack, these “channels” at MS Teams are called: “Teams”.

The 7 Best Slack Integrations and Add-ons of 2021

What about Slack Vs. Microsoft Internal App Support?

Yes, there’s a cheeky fellow that users know as the support bot. It has limited functionality. Given that you input the right command, the bot can render oodles of support to you and your team.

Both bots send automated responses to your questions. The feature is accessible under direct messages. On a lighter part, if you are feeling lonely on a random day at the office, you can try your luck by talking to the bots.

Try entering, ‘Who knows about XYZ’ in Microsoft WhoBot’s private message interface to get a response on identifying the person dedicated to that duty. You can also access Teams’ bot by entering commands in the small chat slot at the top of MS Teams screen. Type down “/Who” without inverted commas to start.

Here’s The Biggest Downside to Slack!

Remember where we talked about Slack’s whopping 1500 integrations? As it turns out, most of them are paid services. Well, maybe not “most”, but some of them are.

Secondly, Slack does not inherently integrate with anything other than storage and chat! Yep, if you need more integrations, you need to choke up some pretty coin as a company. When we are looking to buy additional services as a company, it falls to noticeable expenses.

As a result, Slack has seen a lot of their old-time users switching to Microsoft Teams. MS Teams’ cheapest plan is cheaper than Slack’s basic paid plan. Plus, Microsoft dubs the entire app suite as Microsoft 365 family of apps. You can use other applications too, as long as you have paid for the subscription.

Slack is not consolidated.

Google and Microsoft are consolidated. Think about Google Hangouts, Google Maps, Google G-Suite, and Microsoft 365 clumped together in bundle form. Now, look at Slack. Which one’s going to be the leading collaboration platform in the near future?

In the age-old Slack vs Microsoft Teams debate, it is eventually up to you to go for a specific program. If you or your organization likes to work via Slack, then stick with it. But then again, there’s no harm in giving MS Teams a chance – just for a change of pace.